The IGNITE SERIES of harnesses made by SKYLOTEC impresses with its many clever details, which make it considerably easier to use by people working at heights. The manufacturer of fall protection equipment has set a new benchmark in terms of design and comfort – and has once again been recognised accordingly. The specialists based in Neuwied, Germany, have won the gold prize in the Germany Design Awards 2017. This top international prize is awarded every year by the German Design Council (“Rat der Formgebung”) for a unique product design.

Personal Protective Equipment (PPE) should not only prevent injury, it should also be visually appealing – this is something that has long since become standard, rather than just a passing trend. SKYLOTEC has responded to these demands. When developing new products, the manufacturer of fall protection equipment always focuses on solutions that combine function and design in an exceptional way. This was the case for the Ignite Series of harnesses, which won gold in the German Design Awards 2017 for its unique product design. The prize is one of Germany’s most prestigious design awards and is awarded by the German Design Council to high-quality products, which set new standards on the German and international design scene. More than 4000 products were nominated for the top international prize this year.

The four models in the Ignite Series stand out thanks to a design, which supports the functionality of the PPE against falls. The range features some clever details that enhance comfort. These include high-quality padding, which is adapted to fit the human anatomy and ensures optimum weight distribution on the hips. Until recently, the weight load has generally been on the shoulders – and for several hours a day. This meant that users frequently had to cope with considerable muscle soreness and tensions in the neck and shoulder area. Another creative solution is a new adjuster. This adjuster stops the straps from unwanted loosening. Many users who are constantly on the move and have to tighten the harness all the time are familiar with this problem. The Ignite Series models, on the other hand, do not become loose when constantly on the move.

Cleverly designed colour system makes it easier to use

Another important factor is that the equipment should be as easy as possible to use. So it is with good reason that SKYLOTEC has chosen a cleverly designed colour system for all its harnesses. Grey contrasting elements are used in the lower part of the strap and orange contrasting elements in the upper part. So users can quickly see where the top and where the bottom of the strap is, even when they have not yet donned the harness. This makes it especially easy to put on. Additionally, the main anchor points of all models are bright orange in order to label them clearly. Accidental anchoring on the wrong loops can be prevented in this way. Details such as these are particularly important when inexperienced people are using the harness. As they don't have a particular routine, there is an increased danger of accident through the incorrect use of their Personal Protective Equipment against falls. The four different versions of the Ignite Series models are perfect for use in practically every area of application – whether for machine maintenance in industry, cleaning the exterior of buildings or for maintenance work on wind turbines. Used in combination with other pieces of equipment, such as fasteners or fall protection devices, they create comprehensive solutions, which are available from SKYLOTEC as sets.

Already the second award for the Ignite Series

The Ignite Series was selected by an international jury for the German Design Gold Award. At the beginning of the year, SKYLOTEC had already received the iF Design Award for its innovative range of harnesses. “Receiving the German Design Award is further evidence that we are on the right track with our products, which are designed to make them easier to use,” said Dr. Kai Rinklake, Managing Director of SKYLOTEC. The new models have already become well-established on the market – and are already replacing older product families. With the Ignite Proton, SKYLOTEC has developed a model for the energy and mobile communications industry, which will completely replace the harnesses from the ARG 50 and ARG 51 ranges. The family business from Neuwied in Germany has also developed some outstanding solutions in other product sectors. These include the “Skyrail”, a rail system for permanent fall protection, which has also already won the iF Design Award. 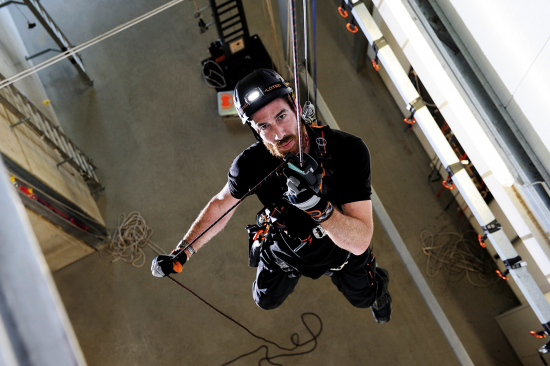 SKYLOTEC GmbH was founded in 1947 in Neuwied and is one of the leading manufacturers of Personal Protective Equipment against falls from a height and of safety systems for the areas of sports and industry. In addition to an extensive range of products in the field of fall protection, our portfolio also includes in-depth advice and services, as well as an international training programme from the Vertical Rescue College. It is this combination of expertise from industry and specialist mountaineering knowledge that leads to ever new innovations from which the wearers will benefit - be it during work or leisure. SKYLOTEC currently employs 420 people globally with its own production sites in Germany, Hungary and Slovenia, as well as branches worldwide.