SKYLOTEC, one of the world’s leading manufacturers of rescue and evacuation devices, has put its know-how into improving its products in the area of hardware over the years. The German, family-owned company is now introducing new solutions for rope access in this segment. This includes the ‘Sirius’ descender - which was specially designed for use in industry and rescue as well as for rope work for arborists and building cleaners. Next to the rope clamp and manual ascender ‘Get up’ new harnesses of the ‘Ignite’ series and suitable soft goods, such as lanyards and loop ascenders, are also part of the new product program for rope access. 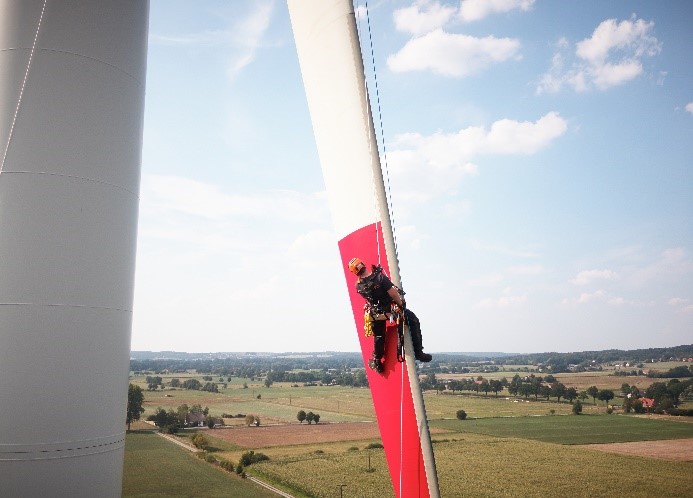 „The 'Sirius' descender was developed specifically for use in industrial rope access and rescue, such as rotor blade maintenance for wind turbines.“

“SKYLOTEC’s ‘Sirius’ is a new descender featuring many well-designed details for criteria such as safety, sturdiness and user-friendliness.”

With “Milan”, SKYLOTEC is the market leader in centrifugal rescue and evacuation devices for emergencies when working at heights or depths. The company has greatly expanded its expertise and manufacturing capacity in this hardware area and correspondingly enlarged its product range. It has now developed a new descender called ‘Sirius’ that is specifically for use in industrial rope access and rescue, as well as for tree care or maintenance work or tactical operations and features several practical details. For instance, the device has a compact design that makes it fit perfectly in the hand. It also has a lever with a small radius of motion that saves time when working because quick and accurate movements are possible. Additionally, the lever closes automatically. As soon as it is released, it blocks the rope in the device. It can only be reopened by pressing a button. The automatically self-blocking lever reduces errors when getting into the work position. An unintended opening of the lever is not possible. Another benefit is that to insert and remove the rope, ‘Sirius’ does not need to be removed from the carabiner that connects the device to the harness. This increases safety for the user because the descender always remains attached to the harness, and rope insertion can be done intuitively and securely with a connected carabiner. A small eyelet in the lever makes it possible to operate the descender with an accessory cord in an emergency - which means simultaneous rescues can be executed. If one person falls or has a sudden medical issue, such as dizziness or a heart attack, an accessory cord can be attached in the lever eyelet of the other person. The user can then operate both his own as well as the descender of the victim and rappel both persons to safety on the ground.

No twisted rope, no turning over

Working with a descender up until now frequently meant battling with twisted or kinked ropes which wear out too much. With the new descender, SKYLOTEC has solved this problem: The work end of the rope is inserted at the top of the device and comes out straight at the bottom without being deflected over an edge. The rope no longer gets twisted, and capsizing is prevented if the free, lower end of the rope is pulled. Many devices change their geometry when flipped over. They start to slide along the rope. ‘Sirius’, on the other hand, has a geometry that prevents it from sliding along the rope, even if it is caught by a foreign object such as a part of the harness. 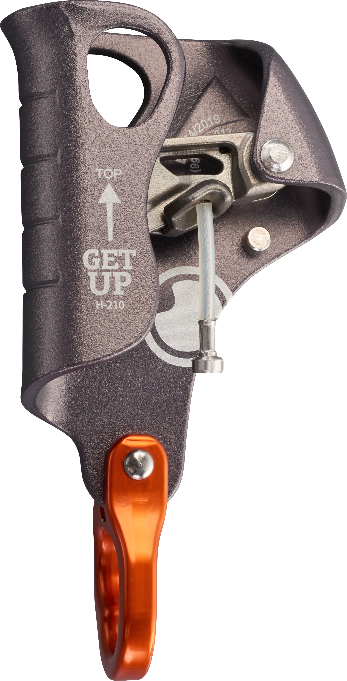 “The special design of ‘Get up’ ensures that the rope clamp can be operated left-handed, right-handed or with both hands and little force.” 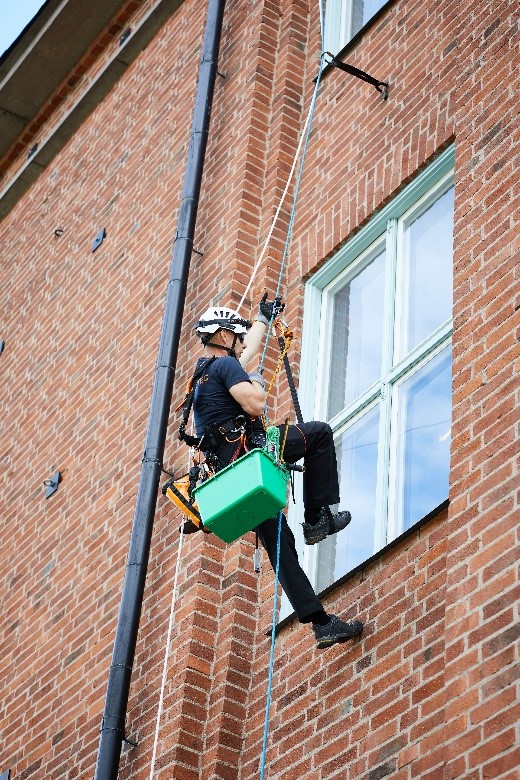 “The ‘Get up’ rope clamp and manual ascender is used for ascents and pulley systems – for example for window and facade cleaning.“

‘Get up’ - handy, light-weight and ergonomic

‘Get up’ is a rope clamp and manual ascender which c

an be used for climbing and rope access. It features details that make handling it easier for users. The ergonomically thoughtful design helps the rope clamp to be operated left-, right- and two-handed which is helpful for long ascents on the rope. A two-carabiner eyelet also reduces the use of materials and eliminates carabiner chains. If foot and safety loops are used, faster climbing is possible. Pulley systems can be quickly assembled with the two-carabiner eyelet. ‘Get up’ also scores with a newly developed opening zipper for user safety. This prevents it from unintentionally opening and, at the same time, makes operating it simple - even when heavy gloves are worn for working. The rope clamp is very light and is completely made of metal which means it is very sturdy. ‘Get up’ is certified according to EN 12841-B:2006 for rope diameters of 9 -13 mm and EN 567:2013 for ropes with a diameter of 8 -13 mm.

In combination with the new products ‘Sirius’ and ‘Get up’, SKYLOTEC also offers suitable softgoods such as the ‘Stand up’ loop ascender and the ‘Veric’ V lanyard. The new ‘Ignite’ series harnesses complete the product range in the field of rope access.