SKYLOTEC RIDER 3.0 is presented with the OutDoor INDUSTRY AWARD in GOLD

Friedrichshafen 18/06/2017: And the winner is ... SKYLOTEC has already had the pleasure of hearing these words many times in the past. This year, the company from Neuwied in Germany has once again been able to impress an independent jury with its innovative RIDER 3.0 via ferrata set with free-running cable clamp, winning the Outdoor Industry Award 2017 in GOLD in the category “Climbing equipment”. A total of 330 participants were competing for the coveted trophy, which SKYLOTEC has now been able to take home for a third time.

The RIDER 3.0 impressed the jury with its ingenious free-running cable clamp and its handy design, which is suitable for left-handed as well as right-handed users. SKYLOTEC has made use of decades of expertise in industrial requirements for safety at heights to make the safest via ferrata set on the market, setting new standards in climbing. The clever RIDER 3.0 and compact shock absorber system prevents falls and guarantees maximum safety. In extreme cases, the cable clamp blocks immediately, preventing a hazardous fall down to the next anchor point.

SKYLOTEC has already impressed the jury of experts at OUTDOOR in 2008 and 2009 with pioneering innovations such as a special children's harness. And so the Outdoor Industry Award 2017 has now become part of the success story of a brand, which has already been recognised with the ISPO Brandnew Award, several Red Dot Design Awards and the German Design Award.

"We feel that the Rider 3.0 represents an important step forward in via ferrata safety. The free-running ascender brakes automatically in the event of a fall. This significantly reduces the fall distance which helps prevent injuries. It also allows the user to rest anywhere." 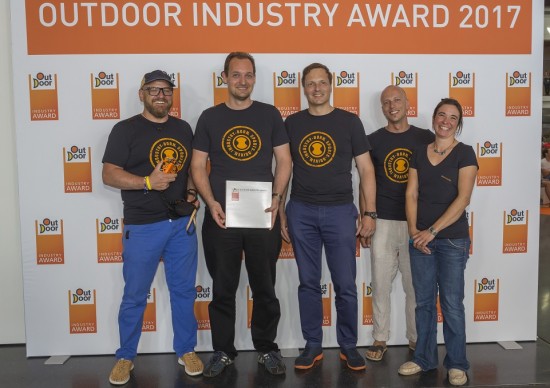 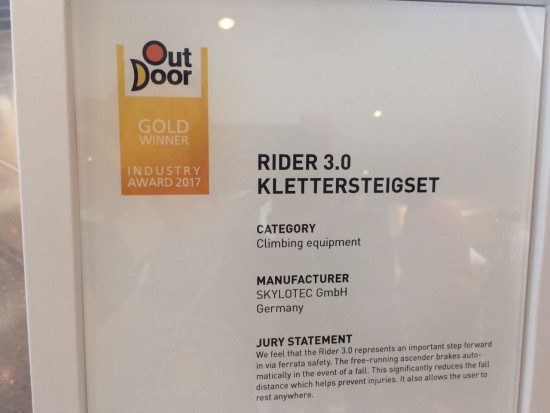 >> See video of the Award Ceremony in Friedrichshafen

>> Official Award Gallery of the OutDoor

>> Learn more about the RIDER 3.0 and SKYLOTEC via ferrata sets