SKYLOTEC at the austrian tree climbing championships in Salzburg

In Salzburg the austrian tree climbing championships took part from the 28th until the 30th July. SKYLOTEC presented a wide range of products used for this job. The Ergogrip Core, the Sidewinder, rope bags, rope pulleys, the PinchLock carabiner and the Kolibri harness have been presented at the event. SKYLOTEC sponsored the Kolibri harness also as price for the championship. Putting up the SKYLOTEC tent was escorted by rain and it seemed to become a very wet turnament day for the ca. 26 participants until it started to get better around midday. Straight after the competitors had checked the different stations, they immediately started to figure out the best strategies to solve the tasks. After a rainy night the second day started with dry weather before it started to rain again as soon as the last competitor came down from the tree.Two women and four men reached the finals on Sunday. Unlike the days before, they haven´t been allowed to take a look at the stations of the trees and so they had to use their whole skills to become the best. With international participation the best three austrian competitors and the best forreing competitor of the first two days reached the masters on sunday. Austrian Christine Sulzberger won the ladies masters against Swiss Simone Scheidegger. Jiri Voda from the Czech Republic won the men´s masters, Willi Matzer became austrian champion, followed by Remy Gschwandtner and Sebastian Fluch.
The SKYLOTEC stand has been well vistited during the whole competition and the products drew the attention on them, so the event has been a great success.
Competition stages: throwing line, fast climbing, foot clamping technique, rescueing from the treetop and work climbing. 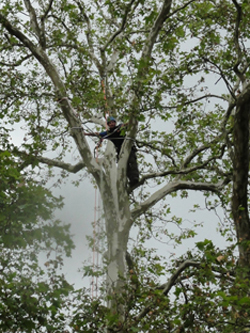 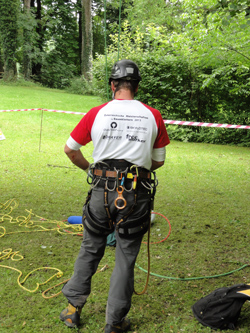 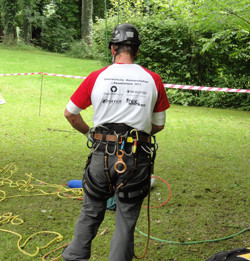